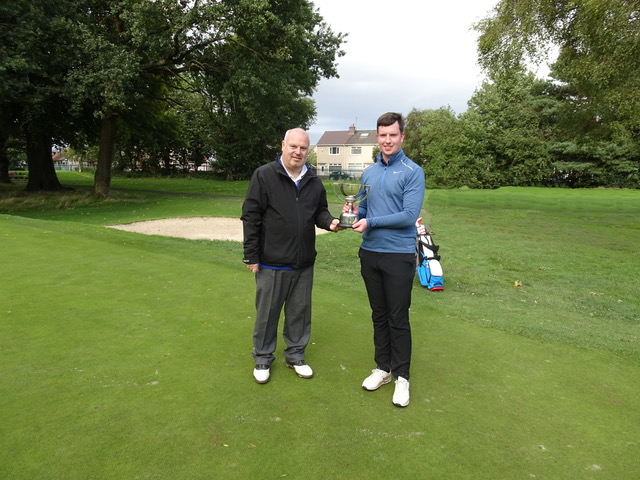 The Matchplay Championship was held over two days from 11th-13th September at Sandyhills Golf Club.

The weather during the Friday afternoon quarter final ties proved difficult for the players due to the heavy rain showers. Match 4 had to be suspended when the greens became flooded late in the afternoon.

The Semi Final matches were played on a blustery Sunday morning, with heavy rainfall overnight. Both matches eventually went to the first extra hole (19th) with some fantastic golf being produced by all 4 players.

The afternoon was just as blustery but some sunshine did appear and we were treated to a superb final with both contestants having passages of great play. After a long tussle, Greg Brown , who had 4 birdies over the last 8 holes, was taken to the 20th where his fifth birdie in ten holes sealed the match. Congratulation to both players for a great final and for a superb finish.

GGU Hon President and ex Walker Cup player Gordon Cosh commented on the high standard of golf produced by all four players during the matches on Sunday, each player a credit to his club.

The GGU would like to thank Sandyhills Golf Club, the Captain Ronnie Dinsmor, their members and staff for all their help on both days and to their new Course Manager for presenting the course in such fine condition despite the seriously inclement weather.

Finally a big thank you to the GGU organisers Andy Quinn and Vic Skelton for their sterling work in organising and running the Championship.

The photo gallery for the Championship may be viewed here

Go to top of page