The Glasgow A team consists of eight players and the eight games must play off in succession although not necessarily in order.

The Glasgow Youth team consists of eight players and the eight games must play off in succession although not necessarily in order.

The "A" team were at Cowglen Sunday 25th playing the second game of the Autumn County League against Stirlingshire.

Many thanks to Cowglen GC for the course which was in great condition and to the excellent catering service.
This was a great effort by everyone involved again and thanks to those who came along to lend their support to the team.

A Team Autumn Series vs Lanarkshire at Easter Moffat G.C on Sunday 2nd of October

The "A" team were away this week to Lanarkshire playing at Easter Moffat GC, somewhere new for most of the Glasgow players so a bit of an advantage to the home team. The course set up was very good with the greens running well even after the heavy rain the day before.

The GGU team had 3 new faces selected , Jonny McLeish from Cathcart Castle, John Mullaney of Ralston and David Docherty of Haggs Castle, it is really good to see plenty of enthusiasm at being selected for the team.

Glasgow got off to a great start with wins for Alan Waugh and Blair Dalgleish, unfortunately Scottish internationalist John Mathers couldn't find an all important putt and lost on the last green. Lanarkshire rallied back with 3 quick wins but debut player Jonny McLeish fought back bravely to win on the last hole. Another great fightback was that of Greg Brown of Cathkin braes who came to the last hole all square and could have snatched a half in the overall match had his putt dropped but unfortunately it hung on the edge to give Lanarkshire the win 4.5 - 3.5.

This was a great effort by the squad, on a course new to them, especially with a couple of new faces in the team.

A Team vs Renfrewshire at Glasgow Gailes on Sunday 9th October

Sunday's game against Renfrewshire was played in wet and wild conditions at Gailes links which was one of the few courses that could stand up to such conditions. With the tough weather neutralising the home advantage, Renfrewshire jumped out the blocks winning the first 2 games, Neil MacRae put a point on on the board for Glasgow with a solid 3&1 win before Greg Brown squared the match with a resounding 7&5 win.

After having a few birdies thrown at him on the back nine, a halved match for Greg Telfer was the least he deserved and with conditions deteriorating bogeys were sometimes good enough to win a hole! Scott Wearing had a commendable half match but unfortunately Glasgow couldn't muster something from the last 2 games and Renfrewshire ran out 5 - 3 winners.

Great effort again by everyone involved and thanks to those who ventured out to support the boys. Course in fantastic condition and as already mentioned, stood up to the elements extremely well.

The "A" team brought the curtain down on their season with a visit to Western Gailes to play Ayrshire. Officials from both counties were out in force to witness both teams battling tough conditions and a strong westerly breeze blowing hard across the course and with quick greens scoring was always going to be tough.
Greg Telfer was up early in his game in the battle of the brothers but was pegged back to finally earn a very creditable half match.
Scottish senior internationalist John Mathers seemed to be inspired and saw off his opponent by the 13th hole but a couple of strong wins from Ayrshire soon had Glasgow looking at defeat. Glasgow Open champion Neil MacRae was in a tight match coming down the stretch and even looked to have made one of the most impressive shots of the year by pitching to 6ft left handed, unfortunately in one of those twist of fates that have inflicted the team all year his opponent holed from 20ft and Neil's putt lipped out. The next hole Neil's opponent encountered similar luck and managed to snatch the hole and the match 2/1.

Ralston club champion Blair Dalgleish had a comfortable win and secured his point at the 15th hole but unfortunately it was too late with Ayrshire running out winners 5.5 - 2.5.

The curtain comes down on the teams adventures this year and thanks are due to president Jim Wilson for his support rain, hail or shine. Best wishes to him as his presidency comes to an end. Look forward to doing it all again in 2023!!

The Youths Series kicked-off with a closely contested match versus Dunbartonshire at Ralston Golf Club.
The team representing Glasgow Golf Union was Leon King, Thomas Rankine, Blair Stewart, Sean Falconer, Matthew Hughes, Reece Coyle, Joe Lynch, & Jamie Wallace. The team selected included some players under 18 and a few either 18 or slightly older. All the games were competitive but ultimately , by losing 2 matches on the 18th green, the result was 2-6 in favour of Dunbartonshire. The performance of players was generally encouraging and we look forward to better luck and good fortune in the remaining matches of the Series.

On a pleasant afternoon on the shores of the Forth, the Youths match concerning Glasgow and Stirlingshire took place at Grangemouth Golf Club. Whilst the official match score of 7-1 to Glasgow might look rather one-sided this does not tell the whole story Sirlingshire, who are going through a period of great change in their organisation and structure, could, on the day, only field a 3 man team. Of the 3 matches that did take place Glasgow won 2 of the 3. These matches were played in a good spirit.

On a fine day Autumn day at Bishopbrigss Golf Club, in great condition despite the recent heavy rains, the GGU Youth team continued their run of good form with an outstanding halved match with the impressive. powerful and unbeaten team from Lanarkshire.

The Scorecard below cannot hope to capture the closeness and intensity of most of the matches. Of course those who won their matches contributed hugely to the overall result but the half points gained by the top and bottom matches were just as important in achieving the 4-4 result. All the teams fielded have represented the GGU in a fine manner and we are confident, despite the small size of our Union, of being competitive in every match we play.

After the 3rd match of the season our results are creditable with 1 win, I draw and a narrow loss. Everyone concerned is looking forward to the next match. 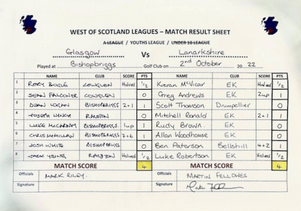 The penultimate County match of the 2022 season for the Glasgow Golf Union’s Youth team was played on Sunday the 16th of October at Haggs Castle. Conditions both overhead and underfoot were good. The course had held up well after the rain of earlier in the week and had drained sufficiently for it to be reasonably dry underfoot. Strong winds as the teams started off gave way to autumn breezes and warm autumn sunshine and quite a pleasant day for golf ensued.

Special mention goes to Blair Stewart and David Lamond for returning impressive victories but as has been the case all season, the matches were all very close with two finishing all square on the last green. However the end result of the tussles on the course was a resounding victory the GGU team of 6-2

The GGU Youths team has had a good season and this victory continues their run of good form, whilst we cannot catch the winning Lanarkshire team, with whom we had a creditable half match at Bishopbriggs recently, a positive result against Renfrewshire in our last match will give us a pleasing high position in the final league table.

Renfrewshire vs Glasgow on the 23rd of October

The final match of the Youths season took place on a dank and miserable day at Greenock Golf Club The course had endured a deluge the previous day and whilst just playable was obviously not in prime condition for this match.

The result was 6.5 to 1.5 to Renfrewshire so a disappointing end to what has been a good season for the the Glasgow team. Special mention to the Rookie player , Darren Docherty, who on his first appearance for the GGU played well and will surely be a regular player for his County in the years to come

The following players represented the GGU this season and Congratulations to all of them for their commitment and enthusiasm, they were a credit to themselves, their clubs and families - Sean Falconer, Chris McMillan who played 4 times Blair Stewart, Josh White who played 3 times Bobby Gray, David Lamond, Dean Logan, Joe Lynch, Thomas Rankine, Jamie Wallace, Jack Young, who played twice Rory Bogel, Andrew Corrigan, Reese Coyle, Matthew Hughes, Leon King, Darren Doherty who played once.